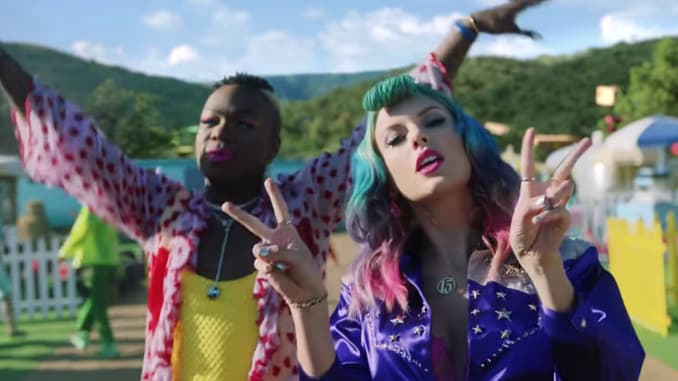 I used to wonder why “Liar” gave me throwback vibes. After doing a quick Google search, I found out the song samples “All That She Wants” by Ace of Base. I don’t mean to take away credit from Camila Cabello and her team. In fact, the beauty lies in the mix of the 90s track, inclusion of flamenco hand claps and elements of mariachi, and the infusion of her sensual tone, to generate a sultry and flavorful comeback single.

59 – Gone by Charli XCX featuring Christine and the Queens

When I first heard “Gone”, the mood is 80s playful. The interaction between Charli XCX and Christine and the Queens felt like a night of going out and enjoying a party. But once I read through the lines, they are clearly dealing with insecurities, anxiety and isolation. A bop and a crowd never assured us these emotions would go away. In this instance, instead of alleviation, they act as triggers and worsen these conditions.

I’ve never been addicted to drugs. But I have been addicted to someone. And I guess that’s how powerful and destructive substance abuse can be. Carly Rae Jepsen speaks of the ingredient that makes obsession a sealed deal – opening yourself up. I’ve built a wall strong and high to avoid the roller coaster she is experiencing. But that’s been destroyed since and the song now resonates like a warning of a story about to be told.

What makes Post Malone stand out among hip-hop artists is his flexibility to switch genres and his capability to project vulnerability in his words and his beats. “Goodbyes” offers the side of him I don’t often see. The track also offers memorable nuggets of heartbreak that will be remembered for years – “Too much pleasure is pain” and “There’s no way I could save you ‘cause I need to be saved too” are just some examples.

56 – You Need to Calm Down by Taylor Swift

Many questioned Taylor Swift’s intentions when she publicly declared support for the LGBT community in “You Need to Calm Down”. Even the sincerity of her reconciliation with Katy Perry came into question. If I may be an apologist, would they rather she didn’t do both? Take out the context, the song is a jam – lyrically witty and the pop take of “Paper Planes” by MIA. That’s all ignored as there is such a thing as bad publicity.

55 – Trampoline by Shaed and ZAYN

I could go crazy over Zayn’s vocals in the song. But first and foremost, the pop trio Shaed deserves credit. The world would not even have “Trampoline” if the group didn’t create the original. Having said that, Zayn and Chelsea’s voices blend harmoniously, and perfectly complement the imagery of the song. The whistling, the raspy tone, and the understated melody create a haunting and mystical spell that enchants my senses.

54 – Medellin by Madonna and Maluma

Madonna has been injecting Latin influences in her music since the 1980s hit “La Isla Bonita”. Some critics are ignorant of this fact and describe “Medellin” as the Queen of Pop riding the bandwagon. I can’t be bothered. That’s not to say there aren’t cringe-worthy lyrics. Just look up “Sipping my pain just like champagne” or “We built a cartel just for love”. But the sound is distinct from any offering you have on the radio today.

The Jonas Brothers proved that boy bands can make a comeback. Not only have they managed to regain their relevance, they’ve also surpassed their past commercial success. The obstacles they had to overcome were slightly less difficult – their hiatus didn’t draw out for long and the siblings are relatively young. I believe the latter was a bigger factor in their capacity to return. I feel happy for the trio but sad for the others.

Growing up gave me perspective and made me appreciate struggles of disenfranchised sectors. I used to find anthems specific to gender or race unnecessary. That’s until I came to terms with my own privilege and that of others. I saw the imperfect distribution of opportunities across people. “GIRL” is a song women can relate to. The single was created by Maren for herself. And seeing her fight a similar battle is comforting and inspiring.

Talking about mental health is as important as any disease or sickness that gets attention today. Yet, not a lot of artists use their platform to create music that directly tackles the anxieties and insecurities plaguing our minds. Matty Healy sounds disturbed. But he also serves to console, demystify and create a wider community in “Frail State of Mind”. He’s spoken about his troubled mind before. Letting this spill over to his art is admirable.