As part of the band’s “Delta Tour”, Mumford and Sons headlined the 2019 Neon Lights Festival at Fort Canning. Reliving the show means recalling how poorly disorganized the event was. This has nothing to do with how well the group’s set played out.

Entering the concert grounds was chaotic. People cut queues left and right. The staff was clueless about the countless queries they started receiving. The disgruntled started leaving. Chants like “Shame!” started getting momentum.

Who could blame them? There were no rules. The worst part was waiting for two hours without any warning or rational explanation of why the delay was necessary. Magically, everyone was allowed in after missing the duo Honne – artists that deserve much better than this mismanagement.

As soon as Marcus Mumford sang his first words, all the frustration went away. The change in spirit is a testament to how brilliant Mumford and Sons were and how passionate their followers are.

The boys were quick to note their journey to Singapore was 12 years in the making. They mentioned the story of an offer in London and how silly the idea seemed at first. I understood why a British folk band who aren’t mainstays of tabloids thought this way. Even I had my doubts about the extent of their fanbase on this side of the world. But as the setlist went on, the appetite lingered on and intensified. 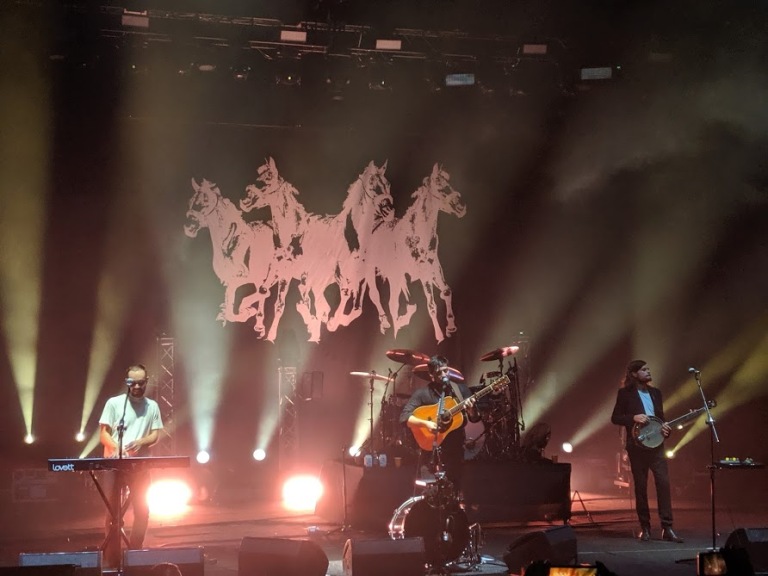 I’ve always described their music as perfect for homecomings and road trips. This was the overriding feeling I experienced during the show’s entirety. I felt a sense of home and community. The vibe was relaxed but at the same time surreal.

Most critics and purists would consider the foursome lightweight. Associating them with rock and roll seems foolish. After all, where do banjoes fit in this formula? But if I may plead my case, they fit the description better than most who belong in the genre.

The infectious energy and the members’ presence during their entire stay on stage sounded louder than any metal sound or loud screams a rockstar can give. Despite the humidity and temperature Singapore is known for, they soldiered on like any artist grateful for an audience would. Marcus belted out each note like there was no tomorrow. They strummed their guitars, hit the drums, pressed on the keyboard, and utilized the banjo the way instruments deserved to be played.

My favorite moment was “Believe”. Even though I cringe at the thought of using phones as flashlights to evoke a sentimental atmosphere, the song’s tune and its words outweighed any skepticism from my end.

If I had any reservation about the show, it was that they should’ve played outside the festival. Not only because of the drama. But also, the audience could’ve been bigger and the set could’ve lasted longer.

I waited for Mumford and Sons to come to Asia. And I will wait for them again.