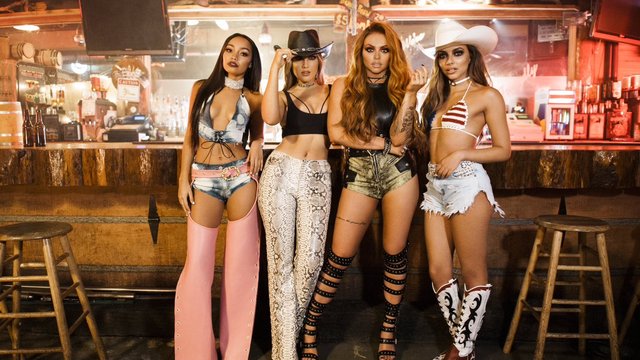 Am I the only one that feels Little Mix is underrated? With each single they release, I become more convinced that they are destined to be one of the top girl groups of all time. If you ask me, the track would be better off without Machine Gun Kelly in it. But me saying that changes nothing about the fact that, even for just a moment, they make me throw that sorrow out the window like a kickass girl group is supposed to.

I don’t know a single person who prefers Ariana Grande and John Legend’s version of “Beauty and the Beast” over that of Celine Dion and Peabo Bryson’s. In my view, the true undiscovered gem from the live action adaptation was “Evermore”. In the movie, this was sung by the Beast when Belle decided to leave the tower and head back to her hometown. But the longingness (and vocal range) he displayed in this track just added to the many reasons I prefer his animal state over his human condition. I know I’m not alone in this.

I know what you’re thinking. “Seriously, she had something released this year?” The answer to your question is a resounding yes and she’s not the only artist who attempted to make a comeback. Think Evanescence, Michelle Branch and Jennifer Hudson. Her recent materials don’t have the groove and production that “Promiscuous” or “Give It to Me” enjoyed. But her bare talent shines better in this setup. This is a track that would’ve worked well in the 90s. I guess there’s no place for her sound in pop radio these days. But I guess there is in mine as I’m an eternal 90s bitch.

Am I the only one that had a hard time understanding what the song is about? Even after I read the lyrics, I had to rely on Genius to provide clarity on what they all meant. What does boujee mean anyway? But as with most songs, I fall in love with beats, melodies and voices. In the end, the lyrics didn’t matter and changed nothing about the catchiness of it all.

96 – Walk on Water by Thirty Seconds to Mars

I don’t get to listen to a lot of rock music nowadays. I’m not sure if it’s due to its declining mainstream appeal or if it’s my own doing. The latest from Thirty Seconds to Mars is one of the only doses I’ve had and one that I particularly enjoy. Of course, there’s something about Jared Leto that dilutes the “rock-ness” of it. But if you listen to it on the radio and had no clue about the artist, you would think this fits well with the genre. Actually, this made a bigger dent in my books vs Eminem and Beyonce’s “Walk on Water”.

“Friends” was like the sequel to “Sorry”. And I could never get enough of the latter so this single is most welcome. I guess this one didn’t get as much traction as it deserved considering how Justin Bieber’s collaborations decided to be as big, if not bigger, than his own singles (“Despacito”, “I’m the One”, “Cold Water” and “Let Me Love You”). Has he finally reached a level of overexposure? I never thought that was possible considering the faith of the Beliebers.

With the rise of EDM, some vocalists are now being relegated to the fringes. At times, they aren’t even credited. But “Solo Dance” is one instance where the singer decided to retain her anonymity. I don’t know if she regrets that decision. After all, Martin Jensen broke out after this track was released. It’s not too late for her to pull a Taylor Swift in Calvin Harris’ “This is What You Came for”.

93 – You Don’t Know Me by Jax Jones featuring Raye

For some weird reason, every time I hear this track play, I remember “Don’t Call Me Baby” by Madison Avenue. Yes, they share the same need for boundaries. They are beats ready to own and decimate everything that is on the dancefloor. There’s nothing monumental to note about the song except that it gets the party started.

After “Riptide” (and some would argue “Mess is Mine”), very few thought they’d get to list Vance Joy in their year-end countdown again. But here I am writing his name down and still listening to his material. “Lay It on Me” is the stuff you expect playing on Grey’s Anatomy or Easy A. That’s not a bad thing. Those are my guilty pleasures. The build up of vocals and the production that becomes full blown once you get to the chorus is that moment in the movie where all cards are on the table and the protagonist must make a choice – to be happy or be stupid. And for a moment, they will be stupid.

Everywhere in Hollywood, women have begun taking what’s rightfully theirs. They have spoken about abuses within the industry. They have headlined movies which made the most money. And in music, specifically hip-hop, Cardi B broke out. She has created a dent in a space where only a few women have managed to – Nicki Minaj and Missy Elliott to name those few. We often hear about men’s struggles with drugs, women and money. But it’s refreshing to hear her back story – a stripper now on top of the rap game. I’m positive there’s plenty more where that came from.