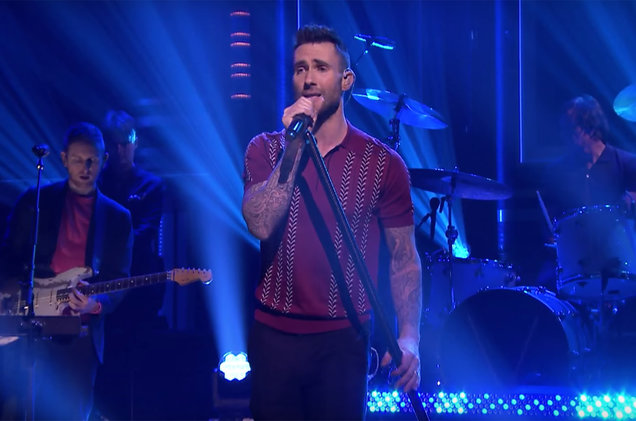 80 – Wall of Glass by Liam Gallagher

No doubt, the sound of Oasis is missed. Liam Gallagher’s solo career is the closest we’ll get to hearing that again. It’s nice to have harmonica in rock music and the long iconic guitar riffs. Honestly, the direction “Wall of Glass” took isn’t entirely new. But the nostalgia he brings was enough to merit a position in the year-end countdown.

I can’t remember a Maroon 5 song that is not catchy. Yes, none of them are groundbreaking. But consistently performing is a feat as well. I would give no credit to any of the hip-hop artists they featured through the years. Often, the bridge in their music can be taken out and the sound would be the same. In “Cold”, the magic lies in the infusion of percussion in the chorus, helping transition Adam’s voice of pure wonder and pain to a place of dancehall and swag. It’s almost like an anthem to dance your pain away to.

Generally, I hate covers or remixes. In my mind, rarely are they done well. One that pops into my head as a perfect example of one that worked is the remix made by Alesso for “If I Lose Myself” by OneRepublic. This is the other one. It would’ve been tragic if people never heard this. My only hope is that as we get blessed with another EDM hit, the song’s theme will not be lost on people. Now, more than ever, do we need an anthem as encouraging and as uplifting as this one.

I didn’t see Julia Michaels’ Grammy nomination for Song of the Year coming. But in hindsight, it does make sense. Her songs deal with heartache so delicately. Her soft tone and sweet voice would be effective in dealing with everyday relationship troubles. If only this played in our heads every time we get into a silly and petty argument, romance wouldn’t have to be so difficult.

Before I get accused of any bias, I will gladly admit I’m a Coldplay fanatic. I asked myself multiple times if this deserves a slot in my year-end countdown or was I just blinded by my obsession. The more I played it, the more certain I was that excluding it would not only be dishonest but would also be an injustice. I dig Oldplay (Parachutes until X&Y) more than Newplay (Viva La Vida until Adventure of a Lifetime). But I still find their music a pleasure to listen to. They sound dull trying to inspire. But I’m dull, so who cares?

Rag’n’Bone Man has the voice of a country singer, the range of a rocker and the appeal of a pop artist. With the way the melody is constructed, every time I listen to it, I’m unable to put my finger on where it belongs, just that it does fit. I guess that’s where its appeal lies. To be clear, it’s not a track that cuts across genres but one that it infuses all of it and that makes the production much grander.

74 – There’s Nothin’ Holding Me Back by Shawn Mendes

Like many heartthrobs, I was expecting Shawn Mendes to be written off in a few years. Yet, he’s still making music, dominating radio airplay and winning awards. Even if I reluctantly put him on my playlist, this track is now on repeat in my IPhone. There’s something addictive about his delivery of the chorus. It sounds like he’s rapping but you know that’s cute because he’s pop. Then, it transitions into a beat you feel would be perfect for some salsa dancing. I wouldn’t say that’s artistry but there’s progress.

73 – Without You by Avicii featuring Sandro Cavazza

Decades back, it would be uncommon for a DJ to have a pop career. Now that there’s an abundance to choose from, I’d still stand by Avicii as one of my favorites. The themes he explores, specifically on living life and living it now, speak to me. For me, he’s in the same league as OneRepublic. And once Sandro Cavazza belts the line “Fuck, I’m going out without you”, you realize you have a companion in Avicii in your journey to forget and move forward.

The versatility that Ke$ha demonstrated surprised many. She was known for “Tik Tok” and “Die Young”. Here she is belting out her grand masterpiece. But to me, the bigger surprise, is her coming out less angry and more forgiving after what she’s been through. I would assume it’s cathartic, writing and singing this song. And listening to it, I feel proud of her and I’m cheering her on.

71 – Cut to the Feeling by Carly Rae Jepsen

Even though she may never match the commercial success of “Call Me Maybe”, I feel like the number of loyal fans she has exponentially increased. I remember people telling me if I liked “Cut to the Feeling” and I didn’t even know what it was. And with how well they spread the good word of Carly Rae Jepsen, it wasn’t long before I discovered it. “Cut to the Feeling” is trademark Carly – upbeat and pop, but not overly produced. If music could provide you a sugar rush, it feels like this would give you the needed boost.